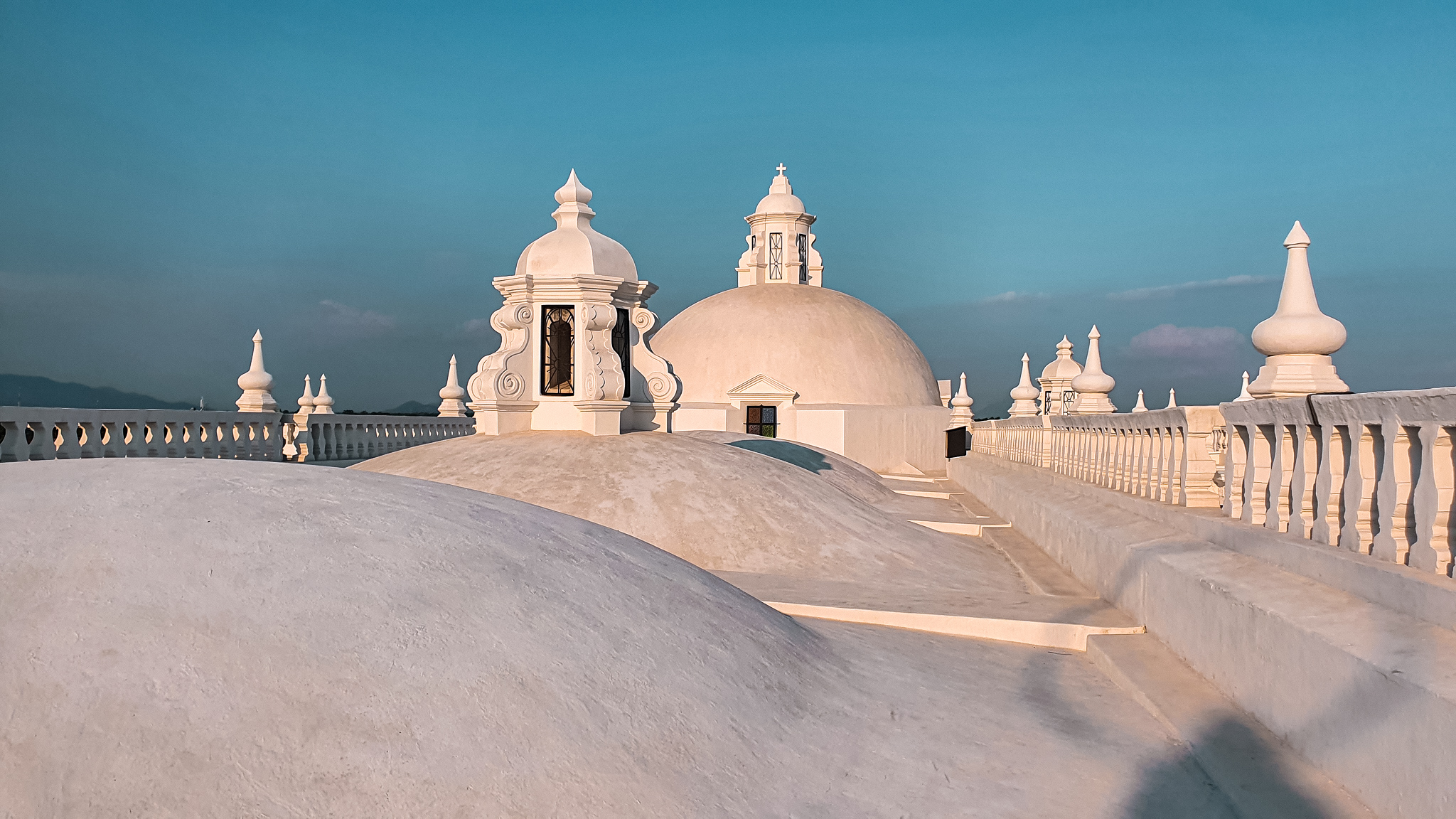 León is one of the oldest cities in Nicaragua and surrounded by volcanoes. Like Granada, the foundations of León were built in 1524. However, in the early 17th century, a volcanic eruption reduced the first foundations of León to ashes and the city was later rebuilt on a different site. So technically, Granada is the oldest city in the country. The colonial character and appearance of León make the city one of the favorites in the country, and the city offers several activities what you can go do.

The Cathedral of León is located at the edge of the central plaza and is known for something you can see jet directly. The roof of the cathedral is completely white and you can visit the roof. There are 2 levels on the roof, the highest of which is white and gives a great view of the city. It is not large, but it is dazzling. On the upper level you are not allowed to wear shoes, you take them off before going up the stairs.

You buy the ticket for the ‘tour’ at the back of the cathedral. If you are on the side of the square you walk right past it and there is a small entrance there at the back. That’s where you buy the tickets for the roof, for 105 Córdoba. The cathedral itself is free to visit. The cathedral is closed on Sundays and has two times a day when you can visit, from 8:30 – 12:00 and 14:00 – 17:00. Tickets can be purchased up to 30 minutes before closing time. To climb the tower, you must be on the left side of the cathedral (if you are in front of it). There is another small entrance, your ticket is checked and the stairs are up.

You can explore the city on your own, but with a guide you often learn just a little more. In León you can also do a free walking tour, based on a small tip/donation for the guide at the end. The tour starts every day at 9:00/16:00/17:30 in the central square, near the cathedral. In about 2 hours you will walk through the city and learn about the history and culture of León and Nicaragua. It also shows some fine restaurants and bars, so it is recommended to do the tour a the beginning of your stay to León.

But not only the city is nice to stay for a while, there are also several activities to do around the city. Surrounding León are several volcanoes that you can climb.

One of the most famous activities in Nicaragua is volcano boarding. Using a metal board, you climb the volcano Cerro Negro, one of the youngest volcanoes in the world, and then slide down it.

You can book the tour with the 2 best known organizations in León, with Vulcano Day or Bigfoot. Both offer a morning and afternoon option for $30. At Bigfoot, you can also choose the sunrise version for $35. You can also book a private tour, those prices will be a bit higher. The time of day all has its advantages and disadvantages. In the morning it can be a little less warm (depending on when you are in Nicaragua), but in the afternoon you can experience the sunset from the volcano and walk up the volcano in the shadow of the mountain.

The tour goes as follows. You will meet at the organization where you made your reservation and after a short briefing you will leave by pick-up or bus to the volcano, this ride takes and hour. Then you get a bag that contains your coveralls, goggles and gloves and you get your board. Then the climb begins with first a flat section, then some rocky and the last section is with more loose sand. The hike is not difficult, you can walk at your own pace and takes about 45 – 60 minutes. At the top you will enjoy the view and the guides will tell you a bit about the area and the volcanoes. The black surroundings, the ash as the effect of the last eruption of Cerro Negro, are especially impressive. Then the descent begins. Overall and gloves on, beanie on, goggles on and go. You have control over how fast you go. And don’t forget to look around every now and then, because before you know it you’ll be downstairs!

》Take only some water and a small snack yourself.

》 You don’t need to bring a phone or camera. At least the 3 guides of Vulcano Day all have phones with them with which they take pictures of everyone at different places on the volcano and during the trip. Very professional. After the tour, you will be able to access and download all of your group’s photos and videos via WhatsApp.

》Please also bring a beanie/scarf to protect your face and ears during the descent.

》If you want to save your shoes a little or they are not sturdy enough, you can also rent shoes for $5. As you slide your shoes over the ashes, they can be damaged.

There are several volcanoes around León that you can climb. You can do it yourself, or go with a tour. The Telica volcano, for example, is a bit further away from León, so a tour/guide is recommended. The hike takes about 4 hours to the top. Keep in mind there is a considerable climb and warm temperatures. Especially in April, it can get very hot in Nicaragua.

About 20 kilometers from León, you will find a number of beaches on the Pacific side. Las Peñitas beach in particular is known for surfing. Or just a day at the beach is very easy to do from León. You can join a (combined) tour or take a cab or bus to Las Peñitas on your own. Other places to have fine surfing in Nicaragua is at Popoyo beach and the multiple beaches around San Juan del Sur.

If you want to go to León from Somoto, you can go through Esteli by chicken bus or by expreso bus. For the last option, stop in San Isidro and change to a bus to León, where the express bus continues to Managua.

Note that the express bus only goes a few times a day from Somoto, the last one going at 3:15. Keep in mind that just like a chicken bus, this one is also crammed with people and you pay a little more than the chicken bus, but stops less frequently. The drive Somoto to Estelí is 70 Córdoba and takes about 1.5 hours.

From Estelí to León and visa versa, direct minibuses go from Cotran Norte station. Those leave when they are full so there are no set departure times, but it runs pretty fast. Allow about a 30-minute wait, depending on the time of day. You pay 150 Córdoba per person for a ride of about 2.5 hours.

If you want to go to León from Granada, you first take the bus to Managua, which takes about 1.5 hours and you change at bus stop UCA to a bus but León. If you want to travel visa versa then take the minibus from the terminal León to Managua for fixed price of 78 Córdoba, with luggage 100 Córdoba, in about 1.5 hours. If you want to travel on to Granada you take the same bus but get off at the last stop, UCA in Managua. This is a station near the university and there are several (mini) buses there for other destinations. There, transfer to another minibus to Granada. This trip also takes about 1.5 hours, for 100 Córdoba (with luggage).

León has its own bus station from where you can travel to Honduras or to several cities in Nicaragua such as Estelí, Managua or Granada. If you want to go to Honduras from León, you cross the border at El Espino and travel first to Cholutaca in Honduras. From there you can travel south by bus (2 hours), to El Salvador (4 hours), or by bus to Tegucigalpa (4 hours). Shuttles also run on this route and they will also cross the border with you. Shuttles can be booked in advance in many ho(s)tels and travel agencies.