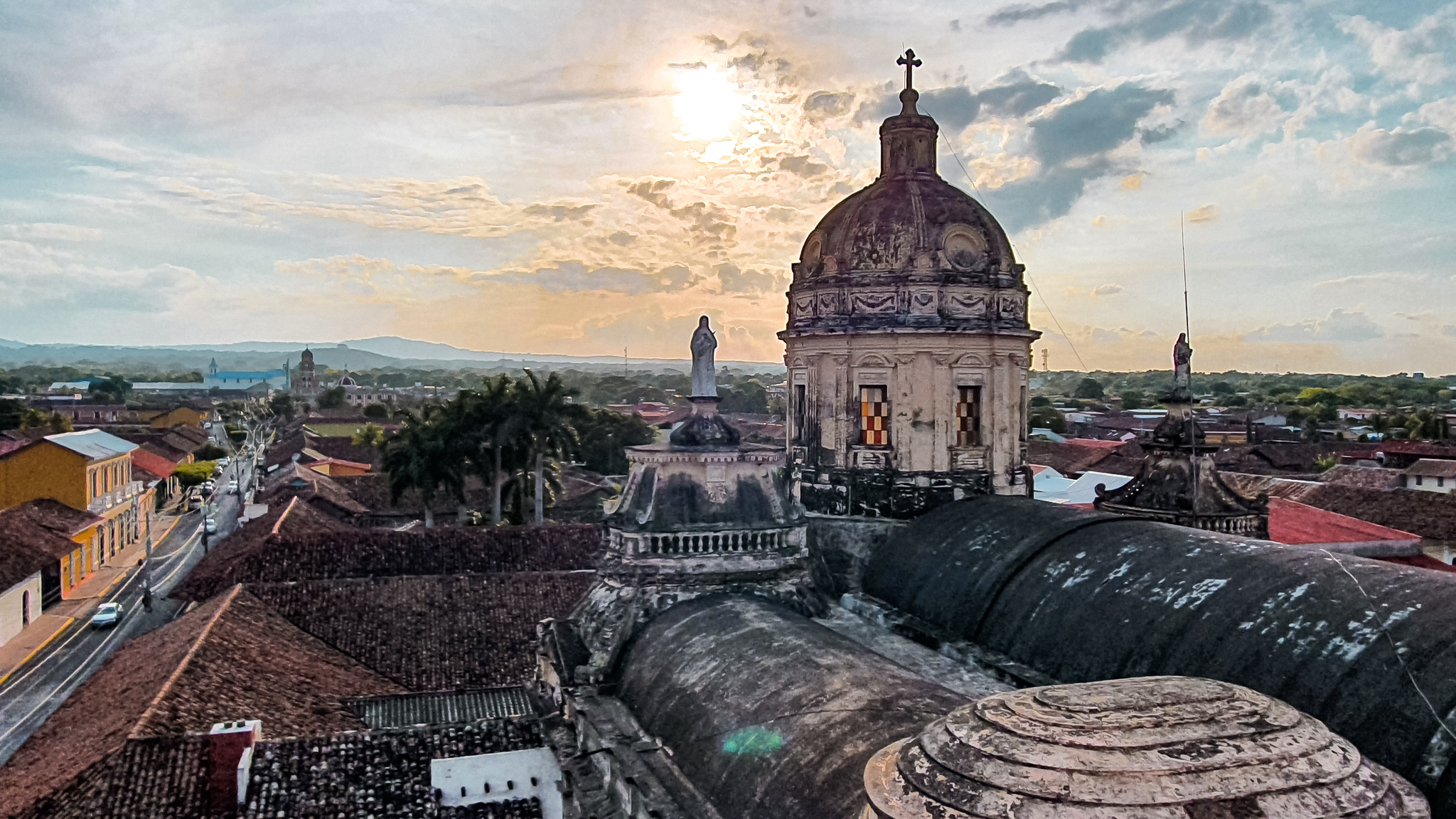 Officially the oldest city in Nicaragua (1524) and beloved by travelers. Granada’s old colonial architecture is well maintained and its colorful streets are wonderful to walk through. The downside is that many travelers also know how to find the city, so you won’t be the only one. Still, Granada is worth a visit, especially when it comes to its surroundings with volcanoes and the surrounding Pueblos Blancos, small villages such as Catarina, San Juan de Oriente and Diriá. They are so named because of the white color of the houses. Plenty to do in and around Granada.

In Granada, free walking tours of the city are (also) offered. It is a fine way to get to know the city and its history. The free walking tours are offered in Granada in several ho(s)tels and tour companies at several times a day. A tip afterwards to the guide is recommended.

Not only can this church be visited, you can also climb the tower. It’s not a tall tower, but it does provide a nice view of the city and of Granada’s brightly colored cathedral. You can climb the tower daily between 8:00 am – 5:30 pm and admission costs 35 Córdoba/€0.95.

Boat trip along the Isletas of Granada

Granada is located on the edge of Nicaragua’s largest lake, Lake Cocibolga. Near Granada is the peninsula Aseses surrounded by hundreds of islands. Not all of the islands can be visited, but you can sail past them by boat or canoe. Boat and canoe trips go daily between the Isletas of Granada. If you want to get out of the city for a while, you can also stay on one of the islands in a more secluded location to tour the islands in peace. There are several (luxury) lodges and hotels to be found. Tours by boat or canoe cost approximately between €30 – €40 for a half day.

The Mombacho volcano is located near Granada. From the town you can see the volcano. Also, this volcano can be climbed, either by yourself or with a tour. If you go with a tour you should expect a trip of around 6 hours for around $45. If you go yourself, take the bus from Granada to Nandaime or Rivas and get off at the side of the road where the road to the volcano begins. Good to know is that the entrance fee is $7. The first 5 kilometers, toward the hiking trails on top of the volcano, is a steep road uphill. Alternatively, you can take a shuttle up the hill. This costs $22, entrance fee included.

Lake Apoyo is located west of Granada and is a nice place to spend a day relaxing and swimming. There are then day tours offered by many ho(s)tels to go to one of the hotels around the lake and hang out in a hammock, canoe and/or have drinks. Often these tours cost around $14. You can also go to the lake yourself by cab ($15 – $20) or by bus (around $0.50, one way). Let the bus driver know that you want to go to ‘Laguna de Apoyo’ and then you can walk the last part to the lake.

Below Laguna Apoyo you will find the so-called Pueblos Blancos. Small villages so named for their (originally) white houses, such as Catarina, San Juan de Oriente and Diriá. San Juan de Oriente is said to be known for its ceramics and traditional method of pottery making. However, we could not find any place that still sold anything. In Catalina you can walk to a mirador, lookout point, which overlooks Lake Apoyo. The entrance fee is 40 Córdoba and you will find a few restaurants and some stores. From the lookout point you can take a walk of about 5 kilometers to the lookout point near the village of Diriá. This viewpoint is free and you will find some restaurants here as well. However, these do not open until later in the afternoon (from about 3 p.m.).

Granada has no obvious bus station. If you arrive in Granada, the last stop is the central square. If you want to get off earlier you can, just let the driver know. You get to Granada from UCA bus station in Managua or by bus from Rivas. From UCA (a station near the university) in Managua there are several (mini) buses for other destinations. There, transfer to a minibus to Granada. This trip takes about 1.5 hours, for 100 Córdoba (with luggage).

From Granada to Rivas you can take a shuttle or public transportation. Please note that this public bus only goes 4 or 5 times a day. Every day at 6:00, 9:00, 11:00, 13:00 and with the exception of Saturday and Sunday also at 15:00. The bus, with luggage, costs 100 Córdoba and takes just under 2 hours. You can find the bus stop in Granada by walking to the UNO gas station, continue walking across the yellow bridge, take the first right and then the 2nd left, there the buses to Rivas will be waiting.

If you want to go to the Pueblos Blancos, for example Catarina or San Juan de Oriente or Diriá, you have to go first to Masaya for 17 Córdoba and that drive takes about 30 minutes. The bus leaves from the market (mercado) near supermarket Pali and goes about every hour throughout. The end point is a chaotic large market in Masaya where there are many stalls, stores, buses and people. Here it takes a while to find a bus that will take you close to Catarina. Just ask which bus to take and specify where you want to go. People are eager to help you. The bus to Catarina/San Juan de Oriente costs 10 Córdoba and takes 20 minutes. As with other buses in Nicaragua, you can get off and on whenever you want. Officially, a bus returns to Masaya every 30 minutes from where you got off (at Catarina). If you end your route in Diriá, you can also take the bus straight back to Granada from there. You can wait by the side of the road for the bus. Keep in mind that they run less frequently in the late afternoon. The drive from Diriá to Granada takes about 30 minutes for 15 Córdoba.