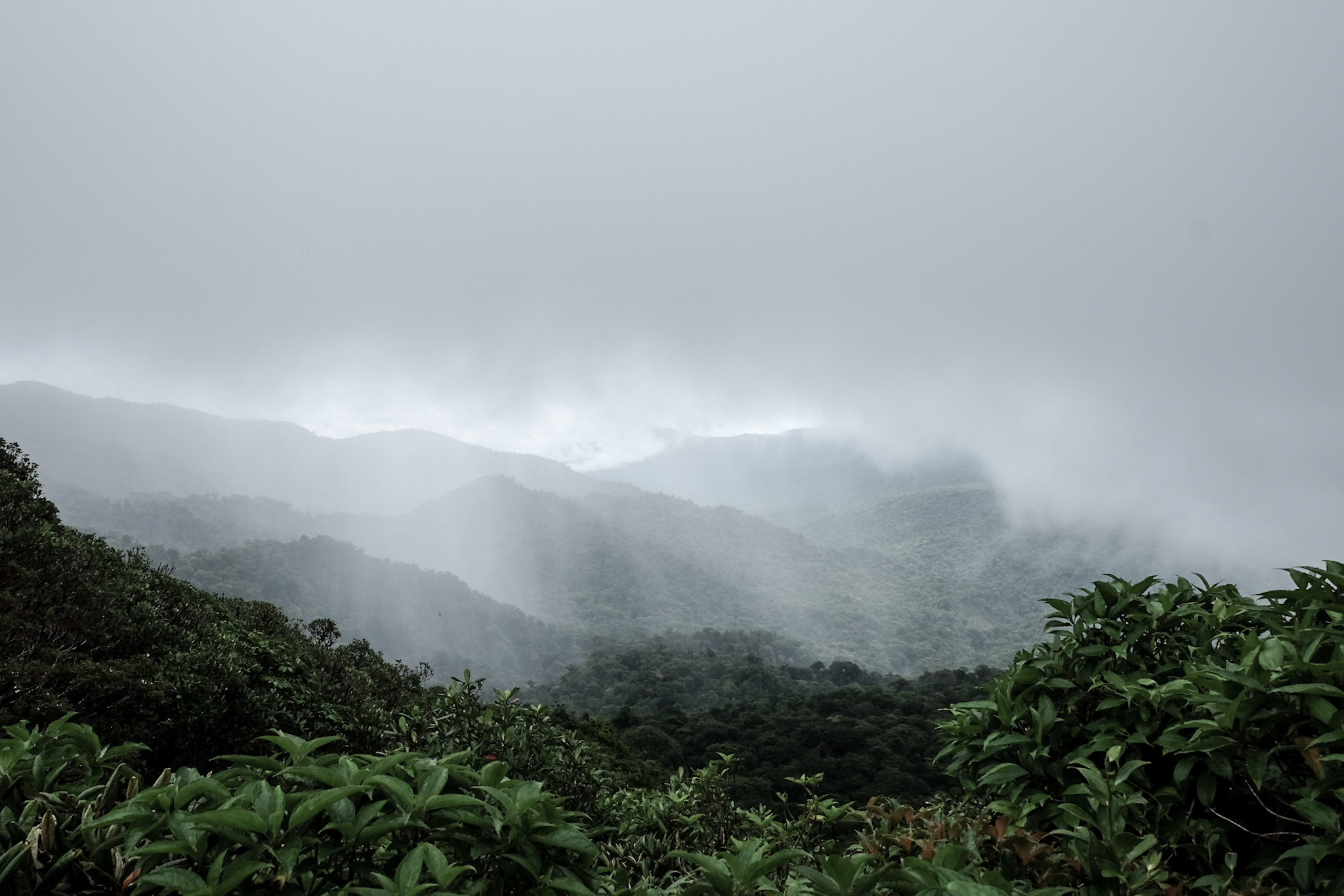 Monteverde, surrounded by cloud forest, is higher at about 1300 meters. Regularly covered by clouds and temperatures are generally a bit cooler. Most people stay in Santa Elena, a village entirely devoted to tourism and located in the region of Monteverde. And the fact that it is touristy is also noticeable in the prices. All activities cost money, from, say, a night tour for €23 to ziplining for €50. But that does mean you can easily stay there for a while. You won’t be bored in Monteverde.

The region has 2 national parks, Santa Elena and Monteverde. In both the parks, walking paths have been constructed, and you can enjoy walking through the green fresh environment. Also, you are likely to encounter different animals such as the nose bear, butterflies, monkeys and several species of birds such as the Quetzal. Santa Elena National Park has 5 hiking trails and costs €15 for adults. You can certainly walk around this forest for at least 3 hours.

Both parks are well maintained and a nice place to walk. Keep in mind that you are in the cloud forest and the weather can turn quickly, rainy season or not. So keep in mind the possibility of rain and mud on the trails. Bringing a raincoat won’t hurt.

You get to both parks by private transportation or by shuttle which can be arranged at any ho(s)tel for $6 round trip per person. There is also a public bus, but it does not run very frequently.

Monteverde is known for its adrenaline tours such as ziplining, bungee jumping and hanging bridges. But horseback riding, doing a coffee or chocolate tour or a night hike are also offered everywhere. In every ho(s)tel and tour company in Santa Elena you can book any activity you want.

If you are coming from the Pacific side of Costa Rica and want to go to Monteverde/Santa Elena, you will travel via Puntarenas. From Puntarenas you can take a bus to Quepos, Jáco, San José and Santa Elena (Monteverde), among other places. These buses leave from the ‘Terminal de buses’ Puntarenas (see google) about 2.5 km from the port of the ferry to Paquera. The buses are grouped by company. It’s good to ask around to locals, bus drivers or fellow travelers exactly where you need to be. Good to know that there are also regular men around who are happy to help you on your way, and eventually want a tip for it.

The bus to Santa Elena from Puntarenas takes 3.5 hours. The distance is small, but the roads on the 2nd half of the trip are bad and the bus detours a bit and has to go through the mountains. The bus costs 1500 colones/€2.25 and you pay on the bus to the driver.

From Santa Elena you can go to San Jose, Liberia, or La Fortuna, among other places. For the latter, you have 2 options. Or by public transport, taking the bus and changing in Tilarán. This trip takes about 8 hours and costs about €10 in total (with change). Monteverde and La Fortuna seem to be close, and they are as the crow flies, but if you want to go from one to the other, you have to go around Laguna Arenal. This also applies to the car, in which case you will be on the road for over 3 hours.

An easier and well affordable option is the jeep – boat – jeep tour. Tourist and commercial, but efficient. This ride takes about 3.5 hours from door to door for about $27. It is called jeep – boat – jeep because previously only a jeep could cross the dirt roads. Now minibuses can also do it so it’s actually bus – boat – bus, but that sounds less sexy. From Monteverde to the boat is about 1 hour, then 45 minutes of sailing and then another half hour to La Fortuna, with some waiting time in between. You can leave at 8:00 am for under $30 (ask several agencies and compare or thing off) and the afternoon option at 2:00 pm always costs $30. You will be picked up at your hotel in Monteverde and dropped back at your hotel in La Fortuna. This tour can also be done visa versa, with the same departure times and costs.