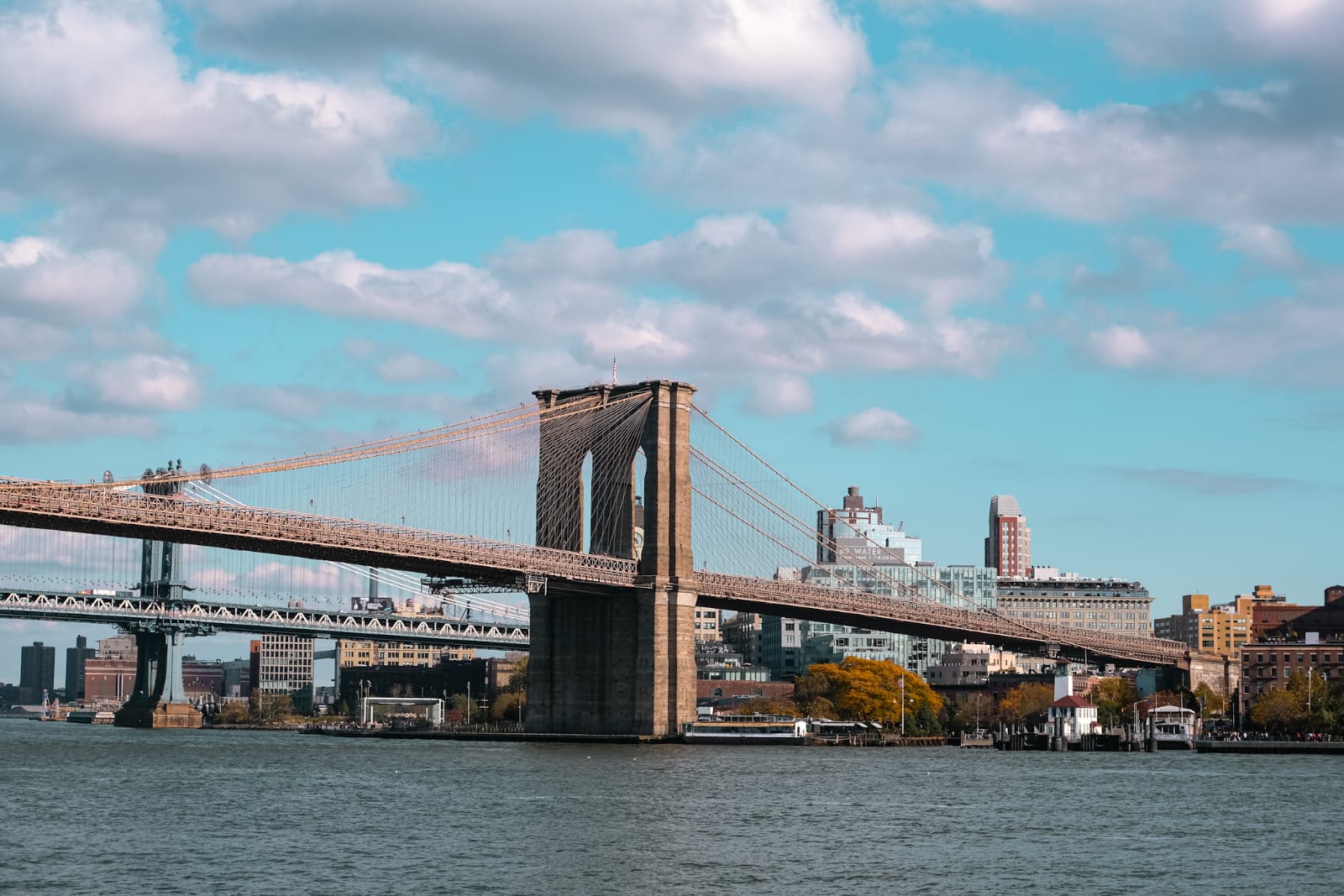 Central Park is a large park and with many winding paths, sports fields and several famous bridges from movies and series. Central Park is also home to the Belvedere Castle, Central Park Wildlife Center and a carousel, among other attractions. So plenty to do in this spacious, busy and versatile park.

Top of the Rock

Top of the Rock, the observation platform at Rockefeller Centre, gives an insane view of the city. You don’t have to make a reservation, but if you want to go up at a specific time slot it can be convenient. You can also go up the the Empire State Building, which is a bit more expensive. However, you may want to view the Empire State Building from a distance and height, and then the Top of the Rock from Rockefeller is recommended. Or you just visit both. Also the famous and oldest toy store in New York is FAO Schwarz and definitely worth a visit.

If you want to enjoy the view from Rockefeller Centre then you pay $38.00 per person for a day ticket and $48.00 for a sunset ticket. For The Empire State Building, you pay $42.00 and $49.00 respectively for a visit to the 86th floor for different times. You can also visit an even higher deck on the 102nd floor and then pay $75.00 for daytime and $82.00 for sunset for both floors. You can also purchase the New York City Pass for $136.00, which allows you to visit various attractions, including Rockefeller Centre and the Empire State Building.

A worthwhile place to visit is the 9/11 Memorial & Museum. The continuously flowing water, all the engraved names and here and there a rose make the monuments impressive to contemplate. The 9/11 Memorial was built on the site where the World Trade Centre stood and is free to visit. The 9/11 Museum was not only created in response to the attacks on September 11, 2001, but is also a memorial to the World Trade Centre bombing on February 26, 1993. The museum is open daily from 10 a.m. – 5 p.m. and costs $26 per person.

The Brooklyn Bridge is perhaps the most iconic and famous bridge, in part because of its handsome construction from the 19th century. The bridge connects Manhattan and Brooklyn across the East River, was built in 1883 and is just under 2 miles long. The bridge has a separate section for cyclists and pedestrians, and a section for (almost all) motorized traffic. Especially in the early morning when it is still quiet or at sunset, the bridge is at its most beautiful. And when it gets dark, you have a cool view of the New York skyline from the bridge and across. It’s a good idea to walk across the bridge and then continue on to Brooklyn Bridge Park, where you not only get a great view of the Manhattan Bridge (1909), but you can also relax nicely in the park.

The Statue of Liberty is another iconic feature of New York. The statue stands in the New York Bay and is a symbol of freedom and welcoming to all. The statue is 46 feet tall (without pedestal) and was a gift from France in 1886 in honor of the 100th anniversary of the Declaration of Independence and as a sign of friendship. The Statue of Liberty stands near Ellis Island, where thousands of immigrants arrived and were registered. A visit to both the Statue of Liberty and Ellis Island is an interesting combination, as both have rich histories. And from the islands, you’ll have a stunning view of the New York skyline.

There are several options for visiting Liberty Island and/or Ellis Island. In all cases you go by ferry. The most common is by Staue Cruises’ ferry that runs from Battery Park, through Liberty Island to Ellis Island and back again. Wherever you want you can disembark and also get back on. A round trip to and from the islands costs $23.50 per person. You can get tickets either online or at the ticket office. Liberty Island and Ellis Island are open daily from 9:30 a.m. – 5:00 p.m. Currently, due to the pandemic, there are some limitations and not everything is open. Please check the current information yourself when you want to go on the official Statue of Liberty website.

If you want to climb the Statue of Liberty, you can choose to climb the pedestal or even the crown. Both are climbed by stairs, 215 and 354 steps respectively. You need a separate ticket for both and for the pedestal, reservations are recommended, for the crown even mandatory. To visit Liberty Island and Ellis Island, feel free to set aside a few hours. The controls are quite strict and there is a chance that you may have to wait a while for the boat. Keep that in mind.

If you just want to get a little closer to the Statue of Liberty and don’t necessarily need to go onto the island, you can also take the Staten Island Ferry that runs between Manhattan and Staten Island for free. This leaves from Battery Park, on the other side you get off and take the same boat back.

The High Line is a lesser known, but cool place in New York. It is a 2.33-mile-long, elevated, originally train track between Gansevoort Street and 34th Street (between 11th and 12th Avenues). Previously, the railroad was used to move goods from one side of town to the other, but that became obsolete beginning in 1980. A piece of the old rails are still preserved and on display. Meanwhile, and only fully opened since 2019, it is a green park where you can walk around freely and see many types of architecture and Street art, all meters above street level. You can visit the High Line for free, start from either point and it is accessible by stairs and elevator.

When you go to New York for a city trip, you land by plane at JFK Airport. From here, you’ll be in Manhattan in about an hour. From JFK, take the AirTrain to Jamaica Station. From this Station, several metros leave for the city center. Then get off at Pennsylvania Station and once outside you are close to the Empire State Building.

New York’s subway network is good. The network is so intricate that you are always within a few minutes’ walk of a station. Another option is to catch a big yellow cab, although that will not always be the fastest or cheapest way to travel. Epic it is, though.

We stayed in Harlem at a great character guesthouse, The Harlem Flophouse. Although this guest house is in Harlem – and thus a bit of a distance from Manhatten – the location is good. With 5 minutes you are at the subway at 125th street and from there you are quickly in downtown Manhattan.

With a 15-minute walk you are in one of the most beautiful parks in the world: Central Park. A lovely place to wander through and especially if you have the time, walking from one end of the park to the other is highly recommended. Then you’ll be on the road for a while, but it’s well worth it!

New York is not a cheap city, but that doesn’t mean the destination is completely out of the question if you think New York doesn’t fit your budget. After all, you can make it as expensive as you want. You can cut back on sleeping space by staying slightly outside of downtown, such as Harlem. From €40.00 – €50.00 per night you can already find a fine hotel. Not super cheap, but still affordable. Check out different booking sites like booking.com, Airbnb or hostel world in advance. For the sights, you don’t always have to pull out all the stops either, there are good choices to be made in this. The city has an excellent metro system so you can get from A to B very well, even on the longer distances. Of course, you can also walk a lot instead of taking a cab or subway, because walking around the city sometimes brings you to the most fun places. Would you like to go to New York, but don’t want to fly back and forth just for that? Then see if you can combine the city trip with a vacation in the area. For a trip to North, South or Latin America, chances are you will need to transfer at the New York airport. See if you can extend that transfer so you can spend a few days in the city. That saves booking a separate ticket again.